Traffic controls will be in place on Sunday, June 9 for the annual Holy Ghost Festa Parade sponsored by the IDESST Sausalito Portuguese Cultural Center. Sausalito's Portuguese-American community has held an annual Festa do Espírito Santo since 1886.

The parade includes flag and standard bearers, big and little queens from each participating Portuguese-American society (each queen generally with two attendants), a marching band, members of the societies, and anyone else who wants to join in.

The first half of the parade will begin at 11:00 a.m. in front of the Portuguese Cultural Center at 511 Caledonia Street. The parade route follows Caledonia to Pine Street, up Pine to Girard Avenue, then along Glen Drive to Harrison Avenue and the Star of the Sea Church at 180 Harrison.

The return parade will begin at approximately 12:30 p.m. and follow Harrison Avenue to Bulkley Avenue, then along Bulkley to Princess Street and Bridgeway. The procession stops briefly in front of the Praça de Cascais for the playing of the US and Portuguese anthems by the band, then back onto Caledonia Street for a closing ceremony in front of the Portuguese Cultural Center.

The free "sopas" lunch will be served at the Portuguese Cultural Center at 11:15 a.m. and 1:30 p.m., with parade participants having priority at the second seating.

LEARN MORE ABOUT THE FESTA DO ESPIRITO SANTO 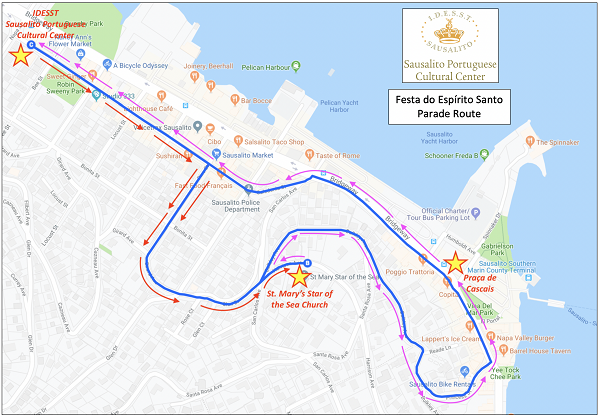