Post Date:07/12/2019 3:15 PM
As of July 12, a new fire boat is on active duty in the waters of Southern Marin. In addition to responding to emergencies on Richardson Bay, the Southern Marin Fire Protection District's new fire boat, Liberty, will respond to all areas of the San Francisco and San Pablo bays as part of a regional fleet of emergency vessels.

Liberty replaces an older fire boat that will be sold to the San Rafael Fire Department. The new 40' boat is larger than its predecessor and can handle heavier seas. Its shallow draft will allow it to operate close to shore and in the northern part of Richardson Bay. Technology upgrades include forward-looking infrared (FLIR), chemical and radiation detection equipment, and pumps capable of spraying approximately 2,000 gallons of water per minute.

The $1 million fire boat was funded with $750,000 from the Federal Emergency Management Agency and $250,000 in matching local funds. Any questions about the new fire boat may be directed to the Southern Marin Fire Protection District at (415) 388-8182. 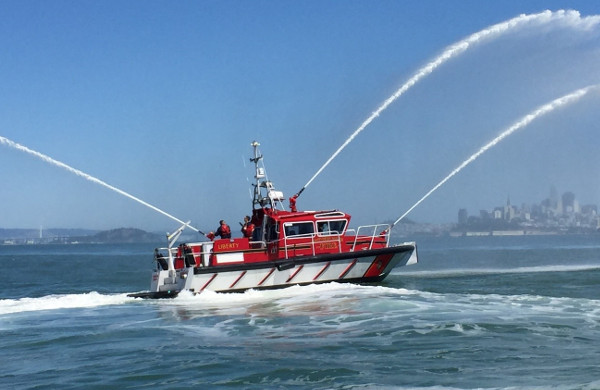