A Visit with Jacques Ullman 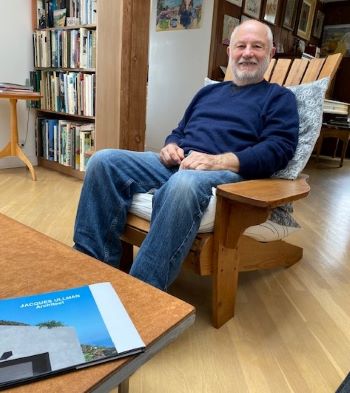 Jacques and Muriel Ullman's home is bright and airy, with a beautiful watercolor collection of Muriel's paintings. A vast atrium skylight greets you when you walk in the door.

Jacques was an architect living on Nob Hill in San Francisco in the late 1960s. He worked on BART and other corporate projects.

He decided to make the move to Sausalito when a couple of run-down houses on Litho Street became available. Ferry service between Sausalito and San Francisco had just been renewed.

The Litho house was both a place to live and work. At the front of the property was a carriage house which Jacques rented out to provide additional income to his home-based architecture business.

Jacques met Muriel through a high school friend, and she came out to California to be with him in 1971. They were married in 1976 and have a daughter named Claire.

Jacques has been involved with Dunphy Park for many years. As one of the founders of Friends of Dunphy Park, he helped make it possible for the City to acquire land to the south of the park that would otherwise have been developed as office buildings and a marina.

Jacques and his friend Paul Leffingwell, a landscape architect, volunteered their time to help develop a master plan for an improved and expanded Dunphy Park that includes the new land acquired by the City. The Dunphy Park Schematic Master Plan prepared by Friends of Dunphy Park serves as the basis for the improvement project now underway.

These days Jacques and Muriel spend their time working in the garden, maintaining their house, taking walks, preparing wonderful meals, visiting with friends, going to the library, painting, and going to museums. They look forward to including the new Dunphy Park in their walks through town.